CEC Audio, synonymous with analogue playback, musical and engaging, their belt drive transports were the pinnacle of CD spinning. So to their D/A converters had that musical soul that reminded us of vinyl playback…Sonic Art is proud to be offering CEC again to the Australian market, we have been involved with CEC since the late 90’s selling many TL series transports and DX series DAC's. We look forward to again, being able to offer audiophiles a digital playback system with a musical, analogue sound.

CEC opened a new chapter in music reproduction in 1991 with the world‘s first Belt Drive CD Transport, the now infamous TL1. Creative mastery of vibration control techniques resulted in this landmark product, whose uniquely analogue musicality has been hailed as nothing less than revolutionary in digital audio. Since then CEC has continued to improve on its designs and launched many globally highly acclaimed and awarded devices. 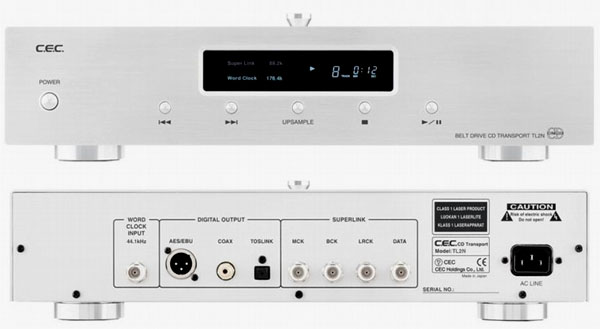 With the CEC TL 2N, the breakthroughs of the previous double belt drive systems have been refined even further than we imagined possible!  The completely new developed double belt drive mechanism has been installed to be fully centred on a larger aluminium chassis for increased stabilization of rotation and no adjustment of mechanism height. While the double belt drive system with the large diameter precision flywheel stabilizer improves the reading accuracy of the music signal. The detail, richness of tone, and spatial information are just breathtaking.

The concentrated application of technical knowledge, innovative capacity and decades of experience has paid off. Pride, craftsmanship, and music reproduction on compact disc have reached a new summit with the CEC TL 2N.

In order to read the signal recorded with Constant Linear Velocity (CLV) on the CD, rotational speed should be decreased as it tracks the outer edge of the disk. Usually the spindle motor controls the variation of speed. All CD players and transports place the spindle motor beneath the turntable for the CD and the motor shaft works as the turntable centre, this is called a direct drive system. The advantage of the CEC belt drive CD system over the normal direct drive has been proved by the long life of CEC’s world’s first belt-drive system, since its introduction in early 1990’s. Simply, in order to eliminate the vibration and electromagnetic noise from the motors (both spindle motor for CD and feed motor for laser pick-up) a double belt-drive system has been utilized, enabling the motors to be located away from the spindle and laser pick-up. A large (Ø 12cm 380 grams) stabilizer to the turntable itself, increases the effective mass and inertial stability, high flywheel effect, stabilization of the disc rotation.

The proprietary CEC SUPERLINK connection system transmits music signals and synchronization clock signals separately with 4 BNC 75Ω cables, requiring no encoding/decoding process for data transmission, and using the master clock generated by the D/A converter to achieve a closed loop synchronization. The transmission system minimizes deterioration of the music signal and jitter. Sampling frequency of CDs is 44.1kHz,this can be up-sampled to 88.2kHz or up to 176.4kHz. (High resolution field covers even 96 and/or 192kHz as well. CEC’s listening test shows 88.2/176.4kHz sound better than 96/192kHz). Up-sampling is not useful and feasible with SUPERLINK. Enjoy the rich and musical sound reproduced by the new double belt drive CD transport TL 2N with the CEC’s proprietary technology.

Up-sampling is not useful and feasible with SUPERLINK.

A BNC terminal is equipped to input 44.1kHz world clock signal generated by an external clock generator. TL2N reproduces the servo clock from the external word clock to combine the system clock resulting in the elimination of jitter (NOTE: not useful with SUPERLINK).

The shortest possible signal pass and stability of signal quality have been maintained by direct mounting of all terminals to the single circuit board. Superior Fluorescent display can be dimmed and even disconnected. The musical cohesion, the rich detail and emotionally gripping “analogue-like” sound is immediately apparent. No other CD drive has sounded so analogue. With the new CEC TL 2N, one can benefit from the advantages of this type of drive. Test reports in international magazines as well as the testimony of our satisfied customers worldwide confirm that we have exceeded our musical objective: music reproduction on it‘s highest level.

This product was added to our catalog on Wednesday 28 July, 2021.